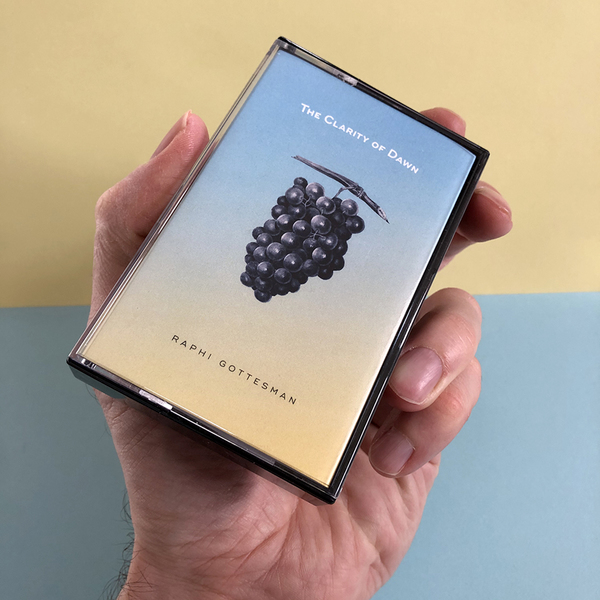 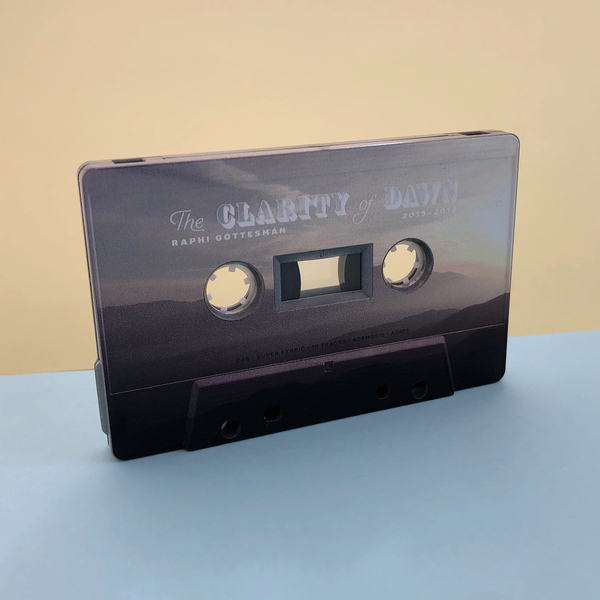 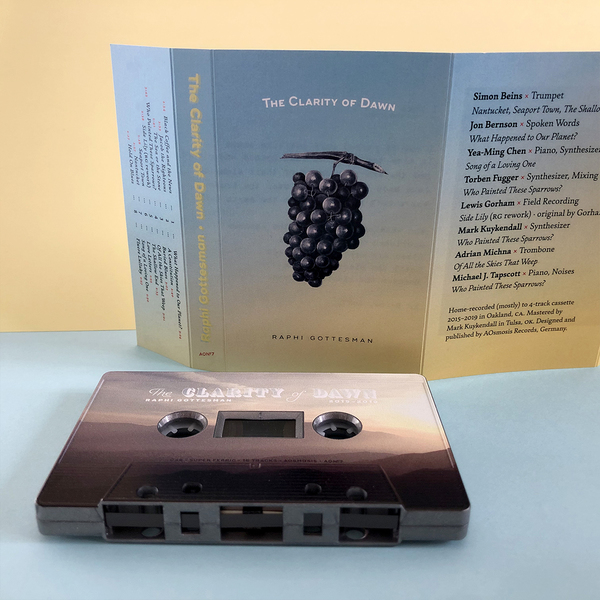 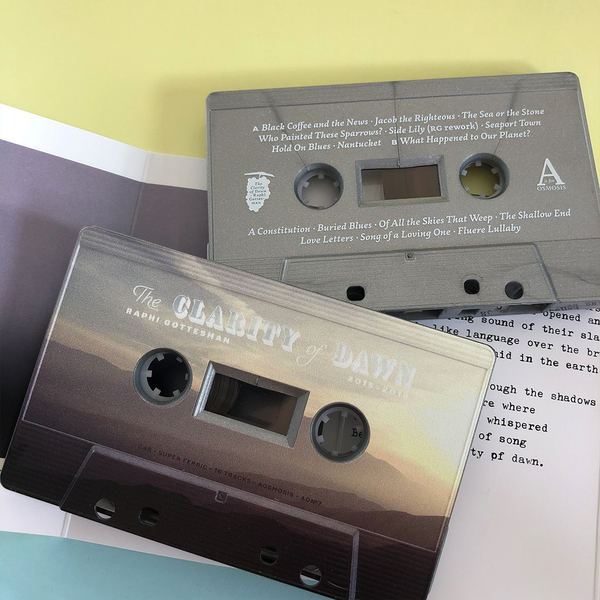 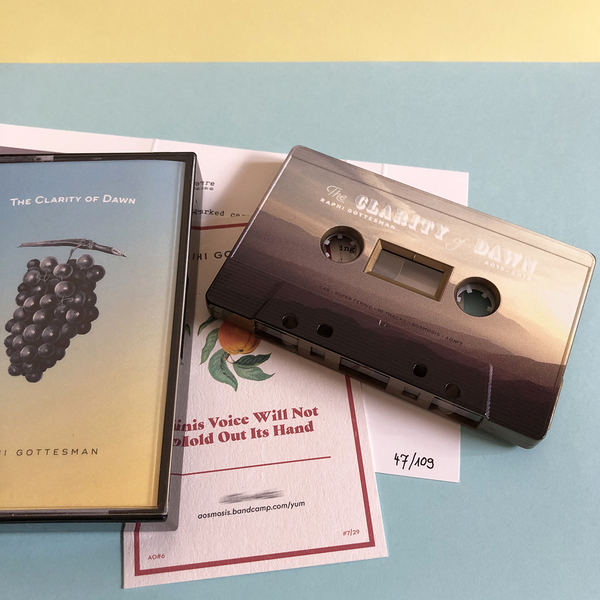 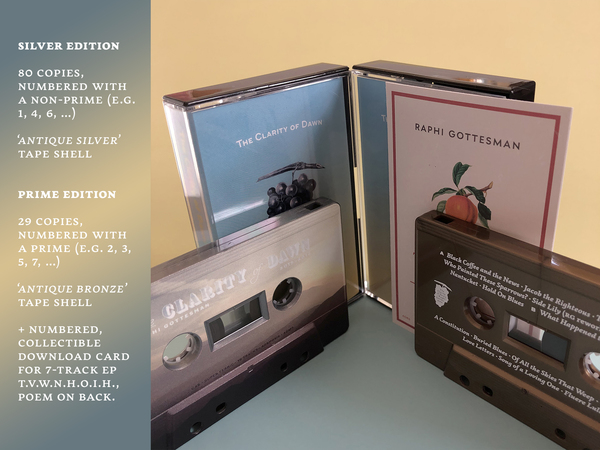 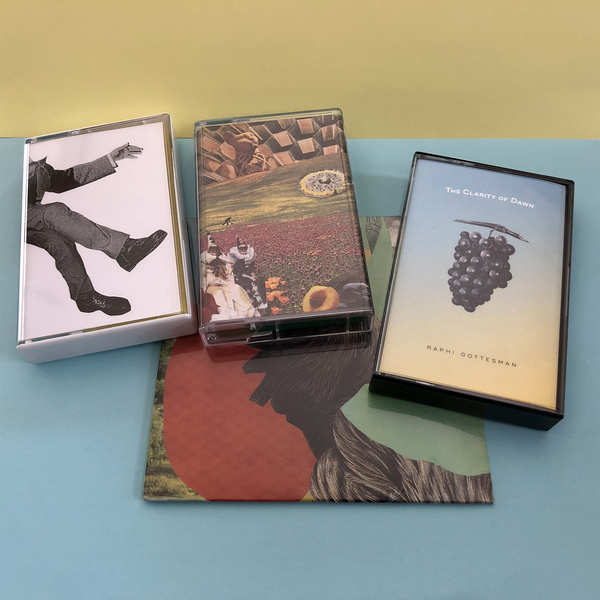 Note: If you want to purchase both existing editions, please check the available collector’s bundle for 10% of the price.

RG: “The Clarity of Dawn” is the result of collaboration with friends/music confidants, a writer, photographer, and friends from the AOsmosis family. Recorded mostly to cassette on a trusted and weary Tascam MK III, then shipped off to friends in Hawaii, Brooklyn, Germany, and down the street for additional layers and surprising ideas. Special thanks to Daniel Knef of AOsmosis for tirelessly working on the art and design, creating a truly unique artifact.

Californian musician (and musical teacher) Raphi Gottesman has a rich history as the drummer for many bands (Odawas and China [the Band] being the “more recent” of them). His ventures into solo works – instrumentals consisting of guitar, synthesizer, bass, found sounds, and drums began around 2010 and lead to his first album “Ballad of the Sad Café” of which quite a number of tracks made it onto the soundtrack of the documentation “The City Dark”. Raphi’s solo recordings were early encouraged by his friend Adrian Michna who released them digitally through his label Rellman Enterprises. One of their earlier mutual projects I am aware of, is this incredible (and first ever officially sanctioned!) remix of Jandek’s Your Other Man from 2005. And then there is also a Michna remix of Raphi’s “Older Than Ferns” (the beautiful closer of “Signed, Noisemaker”) – released on a rare 5" lathe cut in 2015.


Music video for “Jacob the Righteous” by Mark Kuykendall


Music video for “Black Coffee and the News” by Heather Tsang


This album is available in two variants: the non-prime edition and the (naturally more limited) prime edition. 80 copies of the former, 29 of the latter.

BOTH EDITIONS have the following in common:
— professionally dubbed on super-ferric tape reel
— Side A: full-area printed; with partial uv spot that emphasizes the album title
— Side B: playlist for both sides printed in white
— 3-panel j-card on heavy ivory cardstock (featuring credits, alternate cover design, poem, and a photograph)
— hand-numbered on the inside
— purchases from the AOstore include a Bandcamp download code


“When I was a teenager in the 90s me and my fellow anarchists/peace activists/misfits used to set up these guerilla jam sessions in Cleveland’s public square – plugging into the city’s traffic-light grid to be heard over all the hand drums and chatter (I was drawn to minor league illegal activity so this excited me).

I was already a drummer playing in hardcore punk and noise bands but I got to play guitar in these jams cause who was gonna stop me? I remember my friend after about who knows an hour? Saying ‘hey man sounds cool but you might want to change keys or parts every now and then!’ I had no idea looping ambient solo experimental guitar was a thing but I had an impulse toward repetition early even if it annoyed people.

When I was 20 I saw Mick Turner of the Dirty Three play a solo loop-guitar show while projecting video of himself making paintings. Might sound indulgent but I was mesmerized – it was like this complete portrait of an artist and all of his directions. I bought his album ‘MOTH’ which is still one of my favorites.

I kept playing in lots of punk, lo/fi garage, folk/rock bands on drums and then belatedly started recording my own guitar ideas onto a cassette 4-track in 2010. I made a CDr with a hand-drawn cover and shared it with a couple trusted music buddies. I eventually called this collection of songs ‘Ballad of the Sad Café’ (after the title of a Carson McCullers book) and a bunch of the music from it wound up in a documentary called The City Dark. One scene just let the entire titletrack play with no narration and I remember feeling so fragile and flattered watching it in the theatre for the first time with that huge sound system.

Adrian Michna (Brooklyn DJ and Ghostly recording artist) released my music digitally and encouraged me to make and release more. I made ‘Virtual Access’ in 2014, and ‘Signed, Noisemaker’ in 2015 released on the wonderful Swedish label Fleure Tapes.

I’m happy to be sharing my latest album ‘The Clarity of Dawn’ on the German label AOsmosis. Many of my closest musician friends collaborated on tracks and this is the first time I am including poetry (RJ Barbs) and photography (Vera Kachouh) in the tape insert – both of which seem to cosmically match the mood of the recordings.”


Given the cover designs of Gottesman’s previous three albums I decided early on to “continue the thread” and go with a collage-like approach. I wanted to marry the minimalistic cut-out on his debut “Ballad of the Sad Café” with the landscape visuals of “Virtual Access” and “Signed, Noisemaker.” The key-moment for this new cover occured to me when I left the house one morning and was presented with a cloudless sky, presenting a color-gradient that struk me as very artificial in appearance. At this time the album was still deep in WIP mode and had also a different title: “The Shallow End.” This inspired the second element of the artwork: a landscape scene from which I decided to cut the sky and replace with an (actually) artifical color-gradient while the album title was floating in the background like the “THE END” lettering preluding an old movie’s end credits. However, when the name change was decided I felt like testing other things to combine with the gradient. Eventually the fruit motive found in the “Signed, Noisemaker” collage won me over and experiments with a collection of vintage fruit illustrations began. What started out more complex with double-exposed photography turned thanks to Raphi’s intuition into the very minimalistic approach that became the final thing. Btw, an unused close call (apple inside a yellow ring) is found printed on an inner panel of the j-card.